I started thinking about this set a little more when looking for some cards for Matt at Diamond Jesters and his Time Travel Trade program. I actually found three dupes of 1955 Bowman cards that I sent to him in exchange for some vintage Cubs I needed.

I never intended to complete this set, but over the years I have accumulated over 1/5 of the cards (around 70 different cards in all; the set totals 320). Most of these were obtained probably close to 10 years ago, when eBay would have them at reasonable prices. I still will look on occasion for new ones from time to time, but only like to pay $1/card shipped, and that doesn't happen very often. I'm not sure of how the value of this set has changed in the last decade, but I'm thinking it's probably increased considerably.

I got my first 1955 Bowman card shortly after learning about the set, maybe about 15 years ago. It was an eBay purchase and I'm thinking I probably paid 99 cents with free shipping. So for me, this is the most recognizable card of the set. And probably my favorite, because there's something about that first card.

Such a simple, cool, retro design. The TV border is of course the defining characteristic of the set. The card backs are great, too! They feature standard bio information, past year and career stats, and a text section that varies by card. Some of the various topics include, "My Biggest Thrill in Baseball," "My Favorite Baseball Memories," "My Advice to Youngsters," among others. The Virgil Trucks card has this card back: 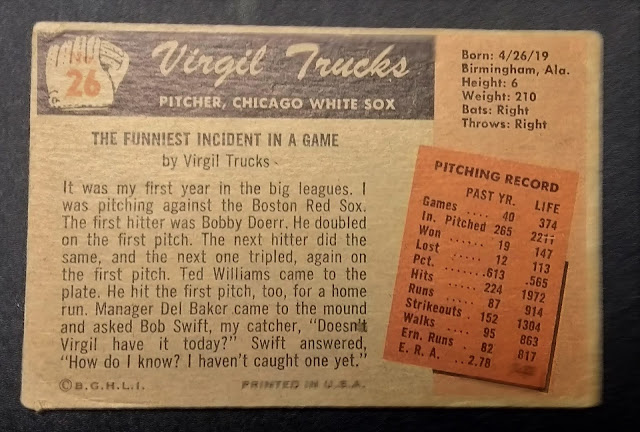 A great story, but I read somewhere about someone doing research and finding that it couldn't have occurred exactly the way Trucks told it, based on the date and situation and such. Still a great story, though.

Unlike a lot of my other retro cards, I don't only have commons from this set. Here are a few hall of famers from my collection:

Yogi has some surface wear, others have some creasing, and one corner of the Rizzuto was the victim of my scissors opening the envelope (GAH!) but overall I think they're pretty nice. The Mathews is probably my favorite of this bunch. My dream card from the set would probably be the Ernie Banks.

Like I said earlier, I have no plans to complete the set, and that's ok. I appreciate the ones I have and it was fun to take a look at these again. Hope you enjoyed them, too!