I've been a less frequent poster recently due to general busyness, but also because I have been focusing on a couple of my collections. The first is my Frankenset, which has become kind of a painful slog. I'm now trying to find cards to fit specific slots in the set, which is a lot of work. By some extensive trial and error, I have finally found a good way to find cards to fit a particular number. I go on COMC and type in the card number in the search box. Then I sort oldest to newest, click the category of Baseball, and scan through the pictures. Previously, I had started looking for some of the higher number sets, since the 661 to 792 range is where I have the most gaps to fill. But going set by set to see if there were cards to fit my particular needs was too much work.

So far, this new method is working much better, but I'm just ready to be done with it at this point. I want to be done so I can sit back and enjoy what I put together, then can casually replace cards as I find upgrades. I'm wondering if I can ever truly be done with the set, though, because there always might be a better card out there to fit a particular slot. It would be kind of cool to just have it be a fluid process, but there are a couple problems with that in my mind. First, I wanted to create checklists in part to fill in some of the card numbers I was missing. So I'd have to finalize the set at some point in order to do that. Second, I try not to repeat certain card themes. For example, no more than one card showing Kent Tekulve's awesome sunglasses, even if there are 10 out there. If I find another awesome one and forget that I had one in the set already, I would end up breaking the rule.

I'm leaning toward setting a final goal of 780ish cards and filling in the rest with custom checklists, even if some of the slots could still use upgrades. Then down the road, maybe as I collect the upgrades, I could do a mass update to the set all at once every year or something. We'll see.

The other collection I have been working on is my Cubs binder. I'm now up to over 790 different Cubs players for my all-time Cubs team.

The first set of cards came from a trade with Bo at Baseball Cards Come to Life, 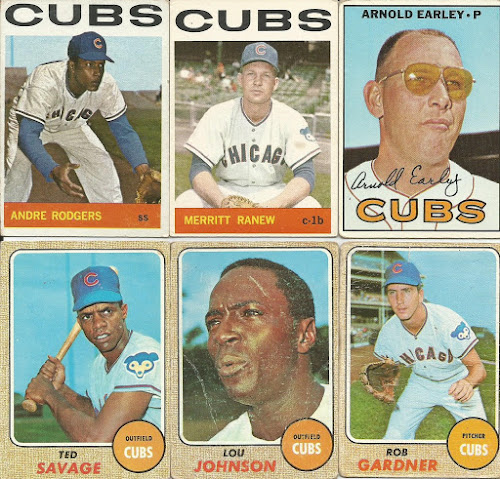 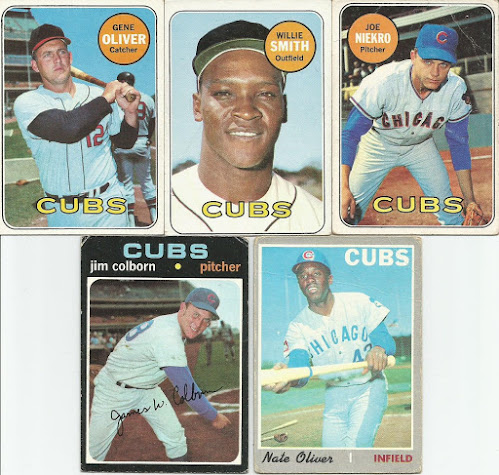 The next set of cards came in two separate acquisitions. I didn't own any 1956 Topps cards before the two you see below. I also recently traded with Matt at Diamond Jesters as part of his time travel trade program. I sent him a couple 1955 Bowman duplicates I had and got these 1957 Cubs in return. 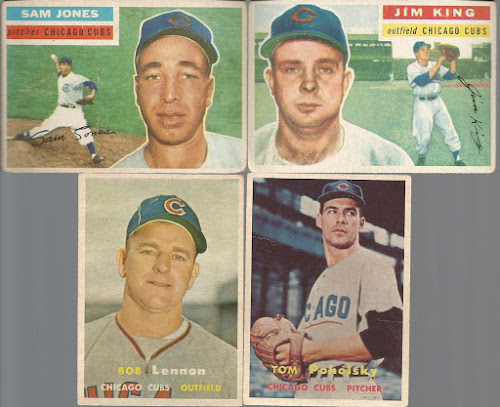 I really like the backs of the 1956 Topps. Really detailed and unique.

At this point, all Cubs players from the 80s and 90s are almost completely covered. My focus lately has been on the 60s and early 70s, since it's easier to find the exact cards I need without trying to track guys down in a million different sets. Take a look here if you think you can help me out. I have vintage cards from these years to trade in return for Cubs players. I also need cards of guys from the 2000s and 2010s, but that list is much more haphazard because of all the random places you have to look to see if the player was ever pictured on a card in a Cubs uniform.

As far as goals, I would say I hope to complete the Frankenset by the end of the year and think I might stop at 1,000 different Cubs cards. But that might take a while.

Thanks for stopping by!