I'm not a fan of the designated hitter. Most people either love it or hate it. I understand the arguments for each side, but land on the side of wanting the see the pitcher hit. I'm more of a baseball purist by nature, and I feel this is the way the game was intended to be played. I like the strategy involved. It's fun to see a guy who is talented enough to both pitch and hit at a high level. But I do understand the other side. More offense can be fun and it's nice to see some guys be able to squeeze a couple more years out of their careers by way of the DH (or a decade; see David Ortiz, Edgar Martinez). I feel like it's only a matter of time before the National League adopts the DH, and it sounds like it could come as soon as this season.

This is all a lead-in to my favorite Frankenset card from page five of the binder. As usual, I'll show you my top three, in reverse order. 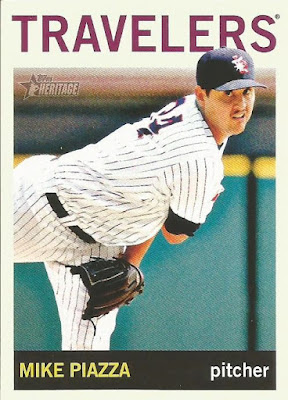 The pitcher version of Mike Piazza (a cousin of the Hall of Famer) topped out at Double-A in 2014. 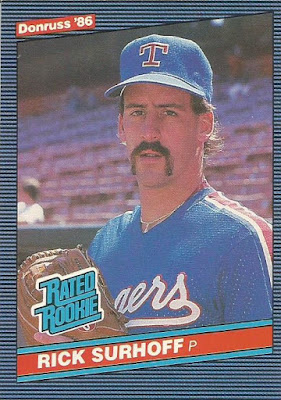 I've said before that when a card fits two separate categories of my Frankenset that it's hard to beat. But despite its greatness, this card finishes in second place. Richard Clifford Surhoff is so much of a lesser known compared to his brother, William James (better known as B.J.) that when you type in Rick Surhoff into baseball-reference.com, it yields no results. Apparently, he was known as Rich, not Rick. Or WAS it Rick? Who knows. What we do know is that his mustache is incredible. I had to research its name, and it is known as a horseshoe and is commonly confused with a Fu Manchu. 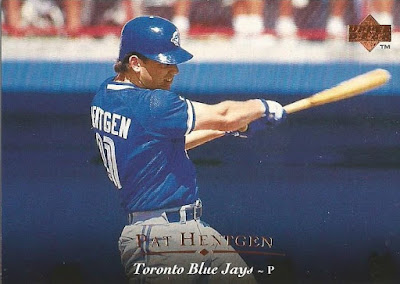 The winner this week is the reason I started this post by discussing the designated hitter. This card is a puzzling sight.

I was confused. An AL pitcher batting in an age before interleague play? When would this have happened? Well, I first thought about the All-Star game. Pat Hentgen made the All-Star team in both 1993 and 1994. In 1994, the All-Star game was held at Three Rivers Stadium in Pittsburgh, a National League park. This meant the DH was not in play. Hentgen pitched, but didn't bat in the All-Star game that season...

And then it hit me, the World Series! Of course! Sure enough, Hentgen pitched game three at Veterans Stadium against the Phillies, going six innings and allowing just one run as the Jays won 10 to 3. This gave Toronto a 2 to 1 series lead and they won the series in six with Joe Carter's walk-off homerun. In game three, Hentgen went hitless in three at-bats. Mystery solved, I think. So instead of a picture of Hentgen pitching from 1994, Upper Deck presumably went with a photo of him hitting from 1993. Makes sense. And depicting that kind of random on a baseball card wins you page five of the Frankenset.
Posted by Jeff B - Wax Pack Wonders at 4:41 PM

Cards, Cards Everywhere! (In Progress - Contact me to add your blog!))